OBJECTIVES: To determine the sleep-disordered breathing in patients with decompensated HF (DHF) at an altitude of 2640m.
METHODS: Polysomnogram during the first 48 hours of admission in patients hospitalized for DHF. Sleep apnea (SA) was defined as an apnea hypopnea index (AHI) > 5/hour and central sleep apnea (CSA) as central apnea index (CAI) ≥ 50% of the AHI.
RESULTS: Sixteen participants, LVEF 24.2±9.9%. All patients had SA, severe in 12 (75%), CSA in 8 (50%) and 7 (43.8%) presented Cheyne-Stokes respiration (CSR). Out of the eight patients with obstructive SA, five had a central component (CAI ≥ 5/h). The SpO2 decreased during sleep to 80.6±5.5% and in patients with CSR to 77.6±6.9%.
CONCLUSIONS: At an altitude of 2640m all patients with DHF presented sleep apnea, most were severe, with CSA and a significant percentage of CSR that was associated with higher oxygen desaturation. 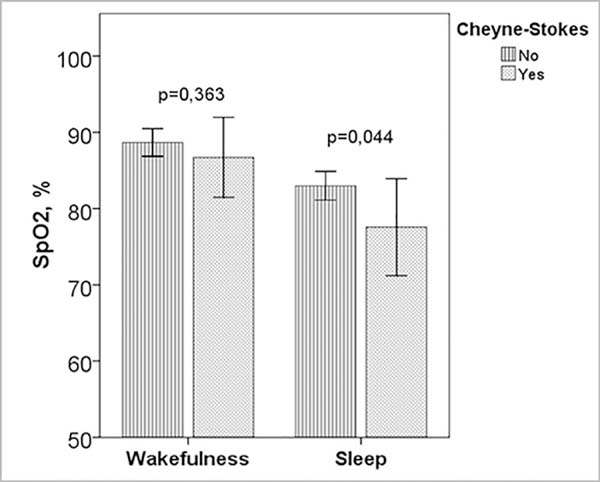 The estimated prevalence of heart failure (HF) in the European Union is 6.5 million, the prevalence reported by the European Society of Cardiology is 15 million people, and it has increased worldwide consistent with population aging, estimating that more than 23 million people have the disease1.

Sleep-disordered breathing (SDB) is frequent in patients with HF and the factors associated with it are instability in the ventilatory control, upper airway closure due to secondary edema by redistribution of fluid during supine position and obesity2. Sleep apnea (SA) prevalence in patients with a reduced ejection fraction is between 47 to 76%3, and in those with a preserved ejection fraction is 62%4. The presence of obstructive sleep apnea in these patients is an independent risk factor for mortality. Despite this, the SDB in patients with HF are not diagnosed or treated3,5.

The frequency of central sleep apneas in patients with heart failure and ventricular dysfunction ranges from 34 to 46%6. Variability can be explained by different factors such as age, gender, presence of hypocapnia or atrial fibrillation7. Additionally, it is associated with a lower ejection fraction, as well as a worse functional class8. In patients with stable severe heart failure, Cheyne-Stokes respiration (CSR) has been described in 30 to 50% of patients. The main mechanism is the fluctuation of PaCO2 above and below the apnea threshold; and in HF they is associated with low PaCO2 both in wakefulness and in sleep, prolonged circulation time and probably hypoxemia9-11.

Altitude confers an additional risk of central sleep apneas. At 2,000m, this type of respiratory events can appear in individuals without cardiac comorbidity, with a direct correlation between higher altitude and severity of central sleep apnea12. At the altitude of Bogota, the lower PaO2 and PaCO2 may come closer to the critical apnea threshold values could increase the presentation of CSR13.

It has been described that the diagnostic approach of sleep-disordered breathing (SDB) in patients hospitalized for decompensated heart failure (DHF) is a tool that allows the initiation of an adequate treatment in a shorter period of time, which may impact several outcomes14,15. Because the characteristics of sleep disorders in DHF at an altitude of 2640m are unknown, our objective was to describe the polysomnogram (PSG) findings in the first 48 hours of hospitalization of these patients.

An analytical cross-sectional study was conducted in subjects older than 18 years old, living in Bogotá (altitude: 2,640m) hospitalized for DHF at the Fundación Cardioinfantil, Instituto de Cardiología. Patients with left ventricular ejection fraction < 45%, clinical signs of decompensated heart failure and elevated brain-natriuretic peptide (BNP) values were included. We excluded those with a previous diagnosis of sleep apnea or CPAP use, and those who required hospitalization in intensive care or permanent oxygen use. The research ethics committee approved the study and all subjects signed an informed consent.

The distribution of the quantitative variables was evaluated using the Kolmogorov-Smirnoff test and they were presented as means and standard deviations or medians and interquartile ranges. Proportions were used for the qualitative variables. The clinical and PSG characteristics were compared among patients with central sleep apnea and obstructive apnea and among the groups with and without Cheyne-Stokes respiration. For continuous variables, Student’s t-test for independent samples or the Mann-Whitney U test was used and for the qualitative variables, the chi-square test or the Fisher’s exact test when the expected frequencies were less than 5. Hypotheses were formulated with two-tailed tests with a significance level of less than 0.05. The SPSS statistical software, version 10.0, was used.

We included 16 patients with decompensated heart failure, 75% men, aged 63.5±13.9. The left ventricular ejection fraction (LVEF) was 24.2±9.9%, 93.8% of the subjects were in NYHA class III-IV, 56.3% had ischemic heart disease and 43.8% had atrial fibrillation. The other demographic, clinical and echocardiographic variables are shown in Table 1.

p=differences between obstructive and central apnea

Variables in the polysomnogram

In all subjects, sleep efficiency was low with a high arousal index. The 16 subjects had sleep apnea (AHI 45.5±21.6), 75% severe, 50% central sleep apnea (CAI > 50% of total AHI) and 7 (43.8%) Cheyne-Stokes respiration. Of the 8 patients with obstructive sleep apnea, 5 had a central component (CAI > 5). In patients with central SAHS, respiratory events occurred more frequently in non-REM sleep (p=0.005) and in supine (p=0.034). In all subjects with central and obstructive apnea, the desaturation index and the T90 were elevated, with a significant drop in oxygen saturation during respiratory events (Table 2).

p=differences between obstructive and central apnea.

Subjects with obstructive apnea had a higher body mass index than patients in whom central sleep apnea predominated, without differences between these two groups in age, sleepiness scale, LVEF, type of heart disease, functional class, comorbidities or medications (Table 1).

In patients with Cheyne-Stokes respiration AHI, CAI, desaturation index, T90 and desaturation during respiratory events were higher than in those without Cheyne-Stokes (Table 3) (Figure 1). Among these groups there were no differences in age, BMI, Epworth, antecedent of atrial fibrillation or LVEF.

Table 3. Patients with and without Cheyne-Stokes.

p=differences between patients with and without CSR.

The main finding of this study is that all patients included with DHF presented SA, most were severe, with the presence of central sleep apneas and with a significant percentage of Cheyne-Stokes respiration that was associated with higher desaturation.

Unlike other studies, all patients studied at the altitude had SA and in 75% of the cases it was severe. Sharma et al.17, in a recent publication, described sleep-disordered breathing in 91 of 105 hospitalized patients with decompensated heart failure, of whom only 40% had severe SAHS. In the work of Kauta et al.14, 78% of patients had AHI > 5/h.

The severity of SA in the patients included in this study may be explained by a lower ejection fraction (24.2±9.9) compared to the Sharma group (36.4±20.5) and Kauta (36.3±21.2), as well as a worse functional class and stage of heart failure (C and D), conditions that influence the pathophysiology of SA in these patients3,18. Unlike our study, in both aforementioned studies, the proportion of patients with predominantly central SA (CAI > 50% of total AHI) was significantly lower17. Similarly, the central sleep apnea index for the total group of patients with DHF (25.9±22.7) is markedly greater than that described in a previous study conducted by our group at the same altitude in subjects without heart failure, suggesting that the occurrence of central sleep apnea is not explained by altitude alone19.

In healthy individuals, the exposure to hypobaric hypoxia at high altitude causes an increase in the ventilatory drive triggering a pattern of alternating central sleep apneas and hypopneas with hyperventilation, oscillations of oxygen saturation and usually accompanied by arousals. In heart failure patients, abnormalities in CO2 chemoreceptor response have been demonstrated and may be the main determinant of the presence of Cheyne-Stokes, triggering respiratory events when PaCO2 falls below the apneic threshold20. Hypoxemia amplifies this response and it may explain the greater presence of Cheyne-Stokes respiration in these patients12,21.

It has also been shown that AHI is greater in patients with sleep apnea at 2,400m compared to those at lower altitudes (1,370m and at sea level), decreasing at the expense of fewer central events22. Oxygen saturation is significantly decreased at 1,860m and markedly at 2,590m23.

Patients described in this study had desaturation during wakefulness, with a significant decrease during respiratory events, with no differences between groups, which correlates with the severity of heart disease worsened by physiological changes related to altitude24. We do not know the impact that the elevated desaturation index and the severity of the desaturation may have in the evolution, control and prognosis of the disease6,25.

We found a significant number of patients with CSR in the upper range of what is described in the literature11. This could be related to the lower PaO2 and PaCO2 in the altitude of Bogota which are closer to the critical apnea threshold values13. Patients with CSR presented higher AHI (59.7±12.8) than those without CRS (34.4±21.0) and severity was not modified with the lateral decubitus position as described by Szollosi et al.26. Although T90 was similar among those who presented CSR and those who did not, we found a higher desaturation index and more severe desaturation during the respiratory events in CRS, in contrast to what was found in some reports where both PaO2 in wakefulness and SpO2 during sleep were normal and practically identical in patients with HF with and without CSR11.

There is some evidence that the presence of CSR is a marker of poor prognosis, with some contradictory data. However, it appears to have some deleterious impact, mediated by peaks in systemic blood pressure and heart rate, and by arousals related to increased sympathetic activity27.

The beta-blocker use rate was 68.8% in the total group, with no difference between the subgroups (obstructive and central) which has previously been described as a factor that does not influence the decrease in the proportion of central events28. Although atrial fibrillation has been described as a predictor of Cheyne-Stokes29, in this group of patients there was no difference in the antecedent of atrial fibrillation between those with and without CSR (42.9% vs. 44.4%, p=0.99).

Some limitations of the study are the small sample size and the lack of follow-up of patient outcomes. However, there was a careful selection of patients using clinical and laboratory criteria to classify them as DHF; only subjects living at high altitude were included and they were evaluated in the first 48 hours of hospitalization with a type 2 polysomnographic study without supplemental oxygen. To our knowledge, this is the first study performed at the altitude, describing respiratory disorders during sleep in patients with decompensated heart failure, which increases the knowledge of these pathologies at altitude. Further studies are required with a larger sample of subjects to assess the impact of SDB and treatment received.

At an altitude of 2,640m, all patients studied with DHF presented sleep apnea, most were severe, with the presence of central sleep apneas and with a significant percentage of Cheyne-Stokes respiration that was associated with higher desaturation.