OBJECTIVE To examine the semantics of chronic pain in narcolepsy and to compare with the poem Inferno, from Dante Alighieri.
METHODS A cross-sectional study, in which type 1 (n=33) and type 2 (n=33) patients (hypocretin-1 quantification in cerebrospinal fluid), were studied at Departamento de Psicobiologia - Universidade Federal de São Paulo (Brazil). We assessed pain descriptors in the Present Rating Index (PRI) from McGill Pain Questionnaire.
RESULTS There was no significant difference in PRI between narcolepsy groups. In both groups, the most frequent words had a sensory dimension: throbbing, jumping, and tugging. Multiple correspondence analysis revealed the predominance of sensory descriptors and the deficiency of affective descriptors in these groups.
DISCUSSION A study that interpreted the poem Inferno, from Dante Alighieri, as McGill Pain Questionnaires descriptors suggested a contribution of the sensory dimension in pain of possibly narcolepsy patients, similar as in our results. 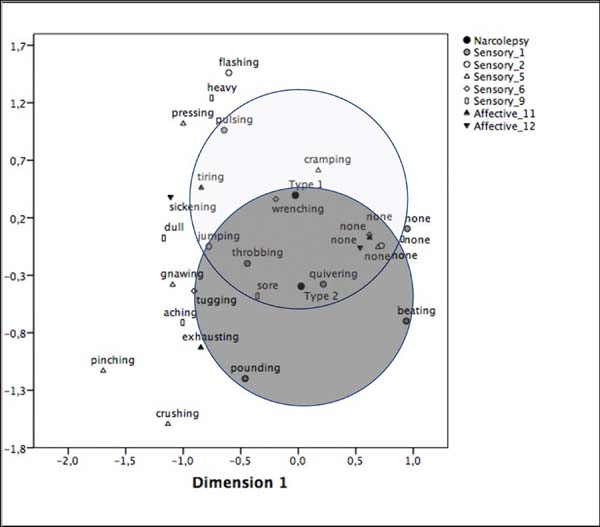 Narcolepsy is a rare chronic sleep disorder; in which daytime hypersomnolence occurs with rapid-eye-movement (REM) sleep disregulation, usually in the habitual sleep period1, with or without cataplexy. Cataplexy is the REM sleep-like phenomena in wakefulness of patients with a specific genetic predisposition. The physiopathology of cataplexy relies on autoimune degeneration of peptide-producting hypothalamic neurons2. Diagnosis of narcolepsy is based on the objective confirmation of REM sleep dissociation through eletrophysiologic tests, and the documentation of hypocretin-1 (Hcrt) or orexin-A levels in cerebrospinal fluid3,4.

Narcolepsy is classified as type 1 according to cataplexy presence or Hcrt deficiency, or type 2 if cataplexy is absent, and Hcrt levels are normal or undocumented5. In central and peripheral nervous systems, Hcrt modulates various physiological functions and homeostasis6. The interruption and decrease of Hcrt signaling results in imbalance of these processes and the patients exhibit multiple comorbidities at diagnosis and follow-up, especitally obesity, psychiatric disorders, and obstructive sleep apnea7,8.

In the last years, strong evidence showing high frequency of chronic pain in narcolepsy has increased9,10. Our group recently demonstrated elevated risk of chronic pain and higher pain mean scores in two quantitative measures of the McGill Pain Questionnaire (MPQ) in patients with both narcolepsy types 1 and 211. In this sample, narcolepsy groups did not differ in pain quality characteristics regarding the Number of Words Chosen and the Pain Rating Index (PRI) of the MPQ questionnaire. Thus, in the current study we aimed to describe the multidimensional descriptors of pain calculated in the PRI in these patients.

From 2015 to 2016, at the Universidade Federal de São Paulo, São Paulo, Brazil, we performed a cross-sectional study in patients with narcolepsy type 1 (NT1) and narcolepsy type 2 (NT2) to identify chronic pain through questionnaires. The patients received regular pharmacologic treatment and filled Hcrt measurement criteria definition according to the American Academy of Sleep Medicine5. We compared 33 individuals in each group of narcolepsy, matched by mean of age (18 to 60 years old) and gender12,13. The participants also answered the Beck Depression Inventory (range 0-63)14. The University's Institutional Ethics Committee (CEP 0428/2015) approved protocol and consent forms.

Demographic and clinical data were collected in medical interview. All participants provided written informed consent and finished the questionnaires. Research staff elucidated doubts for the participant during the completion of the tools and checkedthen for missing responses.

This classic questionnaire evaluates chronic pain in adults, with good reproducibility, validity and responsiveness in normal patients and in pathological conditions15,16. Its original form contains four subscales to assess pain through qualitative descriptors, which represent sensory, affective, evaluative and miscellaneous dimension of pain. Each descriptor has a value associated to its position in the group of words of the subclass of the pain dimension17.

The participant was asked to choose the word that best described their present pain for each subclass of words. The items number of words chosen (accomplished by counting the number of words selected by the individual), body diagram and pain intensity scale were not applied in this study. We used the quality dimensions of pain of the Brazilian Portuguese language validated version18.

Multiple correspondence analysis is a descriptive statistical method for high-dimensional categorical data that explores cross-frequency tables (contingency tables) containing some measures of correspondence between the rows and columns. This technique was performed to visualize graphically the simultaneous relationship between the variables.

We found no difference between NT1 and NT2 in the pain descriptors (qualitative analysis) used in the sum-up of the intensity values of the chosen words in the PRI (quantitative analysis). Remarkably, more than one third of patients with NT1 and NT2 selected a word that belonged to a sensory dimension as the word that best explained their pain. We recognize that the questionnaire has ten groups of words of this dimension (50% of the total).

A multiple correspondence analysis of seven pain groups of descriptors containing the five main words chosen by the patients to describe their pain, according to narcolepsy types, revealed the nearby connections among the dimensions of pain (Figure 1). There is a predominance of sensory descriptors and the words throbbing and jumping have a shorter distance to narcolepsy types than the others in the map. In groups 11 and 12 of affective dimension, the absence of a descriptor (none) is closer to narcolepsy types than the other words of these groups (Figure 1 - intersection area). Most of the patients did not select a specific word of these groups (60.6% in NT1 vs. 54.5% in NT2 of group 11 and 69.7% in NT1 vs. 66.7% in NT2 of group 12). No word was the top selection of affective descriptors in narcolepsy.

Chronic pain is a prevalent comorbidity in both types of narcolepsy. The documentation of this medical condition needs an extensive approach able to identify its main features. This evidence conduct measures of care that impact directly in patient's treatment. In line to this, and agreeing to NT1 and NT2 alike-elevated scores of PRI of our recent investigation, we ought to understand the multiple dimensions of pain perception in narcolepsy. Narcolepsy groups were different in physiopathology, but not in excessive sleepiness, medication or depression indicators.

Even if the statistical analysis did not evidence difference between NT1 and NT2 in pain qualitative descriptors, which were characterized in PRI, our results stand out the high proportions of sensory elements as the most used words in both narcolepsy groups. The first semantic references to narcolepsy's pain in literature constitute mainly of throbbing, jumping, and tugging sensations, independently of the type of narcolepsy. The map interpretation of multiple correspondence analysis failed to differentiate the groups of patient`s using the elements of the categories, as anticipated by the statistic test, but it clarified the minor position of affective descriptors in both types of narcolepsy.

In the Middle Age, Dante Alighieri (1265-1321) reported his understanding of anatomy and physiology of the nervous systems in his epic poem the Divine Comedy, mostly in its first part19. Based on the detailed expositions of neurological signs and symptoms consistent to physical disorders (epilepsy, metal intoxication, and narcolepsy), Dante's works is associated to medical science. His familiarity with these themes is estimated by his education or his own involvement.

Apart from the speculation of Dante's neurological diseases, the Inferno of the Divine Comedy describes an accurate knowledge of the medieval meanings of pain, based on the suffering experience of the characters through their afterlife travel. An motivating study interpreted the images and the expressions of this poem as McGill Pain Questionnaire's descriptors, presenting that more than 50%of the terms used (46 out of 78) were also present in all groups of words of the questionnaire, except for the group XII20. The most used items contained the affective sphere, but the terms related to the sensorial experience of pain were the most habitually encountered, suggesting a contribution of the sensory dimension in the qualitative description of pain, similar as provided by our results.

The irrefutable clue in the inscriptions of the gates of Hell "Through me you pass into eternal pain" guides us through the historians of medicine who suspect of the pathological condition or the understanding of narcolepsy by Dante. Nowadays, the Inferno's first verses explaining his journey with "full of slumber" and the associations with multiple physical and mental disorders (epilepsy, depression and pain) reinforce our interpretation that the poet himself suffered from narcolepsy. What else could it be?

In narcolepsy, chronic pain descriptors are not significantly different in patients with types 1 and 2, but the first report in literature of semantics of pain in these patients showed that the sensory dimension overcame the affective one. Throbbing, jumping, and tugging were the most frequent words represented in this dimension, independently of the type of narcolepsy. Multiple correspondence analysis exposed the minor importance of affective elements in both types of narcolepsy.